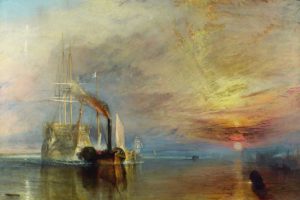 Our latest Jigsaw puzzle of the week is an absolute stunner – the amazing Ravensburger 500 piece Fighting Temeraire jigsaw puzzle.

If you like a challenge with an historic twist then the Fighting Temeraire jigsaw puzzle will be right up your street.

What was the Fighting Temeraire?

The 98-gun ship HMS Temeraire played a distinguished role in Nelson’s victory at the Battle of Trafalgar in 1805.  After her role in the battle she was known as the ‘Fighting Temeraire’. She remained in service until 1838 when she was decommissioned and towed from Sheerness to Rotherhithe to be broken up.

The painting by Turner was thought to represent the decline of Britain’s naval power. The ‘Temeraire’ is shown travelling east, away from the sunset, even though Rotherhithe is west of Sheerness.

However, Turner’s main concern was to evoke a sense of loss, rather than to give an exact recording of the event.

Turner was in his sixties when he painted ‘The Fighting Temeraire’. It shows his mastery of painting techniques to suggest sea and sky. Paint laid on thickly is used to render the sun’s rays striking the clouds. By contrast, the ship’s rigging is meticulously painted.

You can take a closer look at Turner’s masterpiece below. 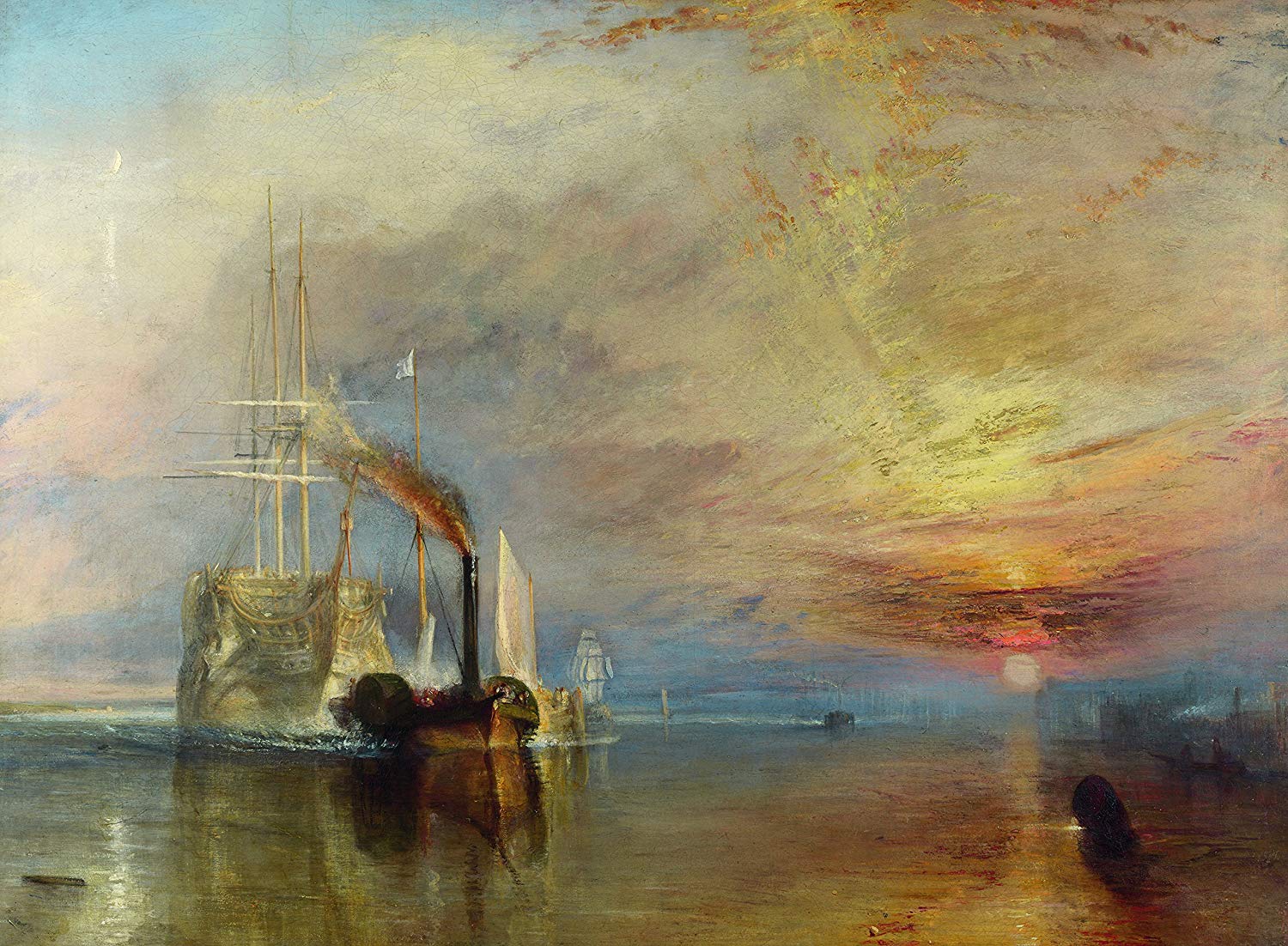 The Fighting Temeraire jigsaw puzzle is a stunning recreation of the Turner masterpiece. Hover over the picture for more detail.

It is an amazing picture, an ideal canvas you could say for a jigsaw puzzle.

What about the Fighting Temeraire Jigsaw Puzzle?

The jigsaw puzzle captures the atmosphere of the original painting fantastically.  The picture has been carefully reproduced and printed on high quality cardboard.  The jigsaw puzzle has a linen finish which minimises the glare making it easier on the eye and trust me this is important.

When completed the puzzle measures 49 x 36 cm so is ideal for a small table top.

Don’t be put off by the small number of pieces.  Although the Fighting Temeraire jigsaw puzzle weighs in at just 500 pieces it still provides a fantastic challenge.

Because of the way Turner painted the Fighting Temeraire there are very few solid boundaries with colours merging into one another.  This ramps up the difficulty of the jigsaw puzzle making it more of a challenge than your typical 500 piece jigsaw.

All in all if you like your jigsaw puzzles to have an historic feel and you are looking to pass a relaxing few hours marvelling at the genius of Turner then this jigsaw puzzle is perfect.

You can find the Fighting Temeraire jigsaw puzzle on Amazon.

We hope that you enjoy our free puzzles!  During this crisis we are choosing to support the amazing NHS Charities Together.

They are a group of charities that are supporting health staff and volunteers caring for Covid 19 patients.  We can understand that this is a difficult time but if you would like to donate we would be extremely grateful.  Please click on the donate button below to donate via PayPal.

Can you solve the puzzles, crack the code and save the world?